ORLANDO, Fla – When it comes to housing, there’s no denying that the U.S. is   currently experiencing a seller’s market for the ages – but there’s some confusion about the underlying reason.

We’ve all heard the stories. Tearful would-be homebuyers being outbid at every turn. Their frustrated and exhausted agents turning the town upside-down, trying to find the next listing before it’s gone.

The struggle is real, and the data backs it up.

It also happens to be the lowest level of inventory ever reported by Florida Realtors Research Department, whose statistical records extend back to January 2008. The  department calculates monthly resale market statistics from data provided by Florida’s numerous multiple listing services. 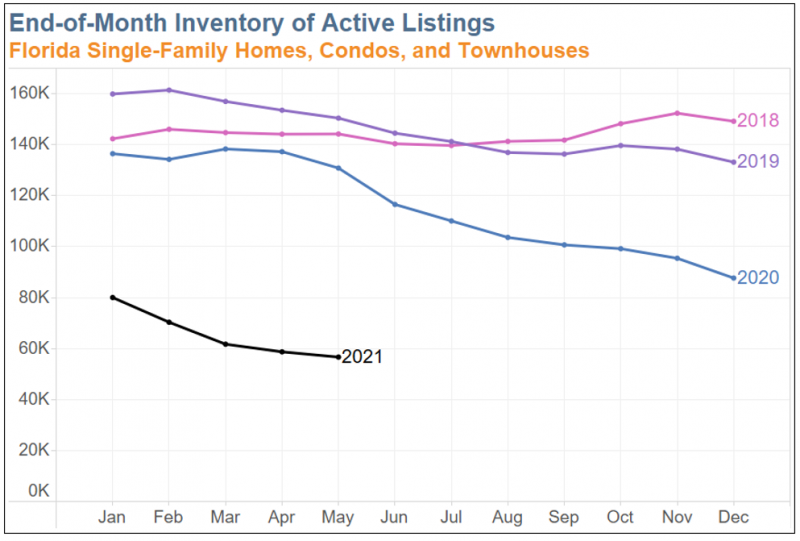 This decline in resale inventory is not unique to Florida, either. Recent housing market commentary from nationally prominent real estate analysts and economists has zeroed in on the low inventory counts being reported all around the country – and rightly so.

Unfortunately, though, this laser-like focus on inventory levels – along with all those vivid stories of buyer hardship – has given rise to a broadly held belief that significantly fewer homes are being listed today than before the pandemic.

As it turns out, that’s not really true.

Inventory is simply not a good measure of how many homes are being listed for sale. When it falls from one month to the next, it only means that fewer listings became active compared to the number that became inactive. A home going under contract affects inventory just as much as a home being listed for sale.

Most housing market commentators have been so busy telling you about our shockingly low inventory that they’ve forgotten to mention (or haven’t  noticed) what’s going on with another key statistic: new listings of properties for sale.

Well, here’s what’s been happening with new listings. From January through May of this year, more than 246,000 existing homes were listed for resale in Florida. 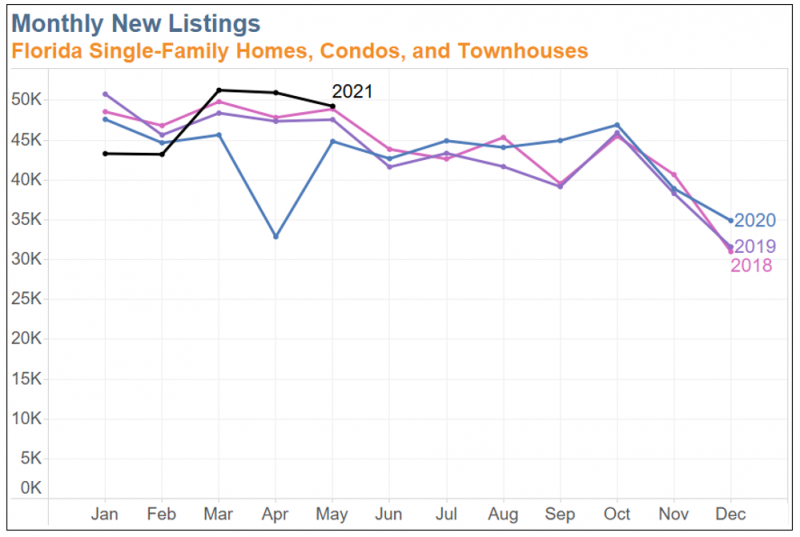 That figure should raise some eyebrows. It is quite close to the roughly 250,000 and 248,000 properties that were listed during the same period in 2018 and 2019, respectively. And with the exception of those two years, it’s the largest total recorded for the first five months of any year dating back to at least 2008.

In truth, apart from a bad April last year (30% fewer new listings than in April 2019), the number of properties coming onto the market each month wasn’t substantially different during the pandemic than what it was pre-pandemic.

This trend has been visible for months now, not only in the statewide data, but also across local markets and different property types. And local data from markets elsewhere in the U.S. also reflect this trend, indicating it is happening nationally, not just here in Florida. 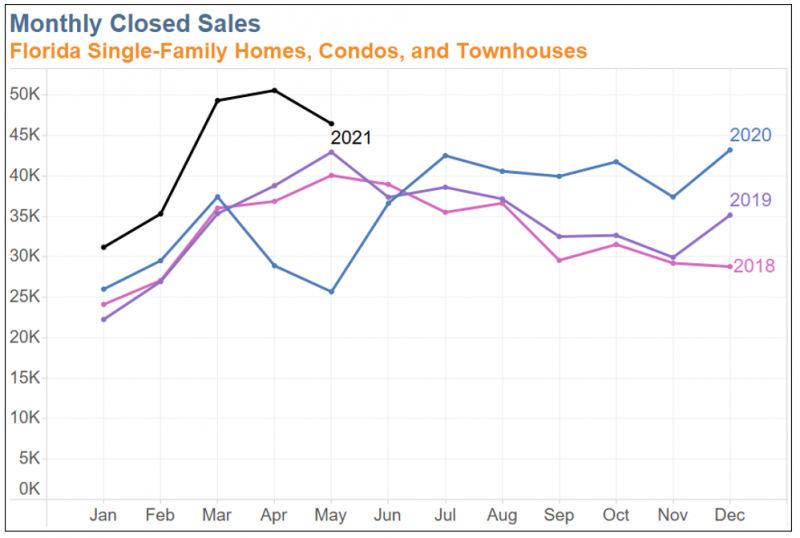 So why, then, is our inventory so low? Because all these homes being listed are selling – and selling fast. We’ve obviously had more closings so far this year than in the early months of last year due to the onset of the pandemic. But we’ve also had 28% more closings than during the equivalent period in 2019. Half of the sales that closed this May were only on the market for, at most, 12 days before going under contract. In May of 2020, that figure was 34 days. In May 2019, it was 44 days.

At this current rate, a lot of homes being listed aren’t even showing up in the end-of-month inventory figures. They’re going under contract before they can be counted.

The bottom line: Our inventory has been eaten away by a huge influx of buyers motivated by record-low interest rates and a pandemic-driven desire for a change of residence – not a decline in new listings.

A useful analogy is to think about an empty shelf at the grocery store. That shelf might be empty because the store stopped getting shipments of the product that goes on the shelf. On the other hand, it could be empty because demand has dramatically increased for that product and the shelf is being picked clean as soon as it gets stocked.

The latter scenario is a better description of our housing market right now – and that’s the better scenario. If inventory were instead falling due to a lack of new listings, there would be nothing to sell. Sales over the past year would have been down in a very big way, not marching at the record pace they have been.

Now, are there constraints that are keeping the number of new listings from rising to meet this elevated level of demand? Absolutely. We want to have a lot more new listings than normal right now, and we’re not getting them. That’s why it’s still accurate to call this a housing shortage.

At least, though, we’ve been getting enough listings to accommodate a huge expansion in the number of sales. This expansion has put the housing market at the forefront of our economic recovery.

That’s something we can all take solace in, even if it is cold comfort for all of those prospective buyers waiting to pounce on the next listing that pops up.

Brad O’Connor, Ph.D. is the Chief Economist for Florida Realtors

We will be contacting you shortly.